Since I started work on a tie-in novel, I haven’t written too much about the main product. But, I’ve been busy  behind the scenes collecting final reviewer comments. As a self-published author, I didn’t have a publishing house’s editing team to help me polish Sagitta. Instead, I used waves of experienced readers to sequentially refine the drafts.

I’m calling those readers my alpha, beta, and omega readers. Alpha readers helped me hack apart and reform the really rough first draft, beta readers caught most of the typos and pointed out things that were missing, and omega readers are currently giving it a final once-over. There were intermediate reads, of course, and even before the alpha draft (2018), there were multiple earlier versions dating  back to 2005.

It’s been a long process, and it’s hard to believe I’m almost done. By that, I mean almost have something ready to go on Amazon, something I hope is indistinguishable from traditionally published books in terms of quality (at least books by first-time authors). I know I can’t compete with the likes of Orson Scott Card or Brandon Sanderson, but I can dream!

Today I officially unpublished the draft version of the paperback I’ve been using as a review tool (I’ve found people catch different typos when reading a paperback vs. an electronic copy). Unpublishing the draft was necessary, because I wanted to change the way my name is formatted in the metadata (from C M Benamati to the more common style of  C.M. Benamati), and Amazon only lets you edit this field if you make a complete new revision. I felt it was worth it, if only to get consistent with the cover art, and to form a consistent “brand”, so to speak.

I also fixed a few more typos. Thanks Al for finding that last one.  “Mauria was a smoldering run” doesn’t exactly make sense, now does it?

The new revision, both paperback and Kindle editions, will hopefully be up on Amazon next week. I expect to still find a few issues here and there, but for the most part this one is done! I’m also half done writing the tie-in novel, Hrain, which I plan to use the same editing and review process on. After that it’s on to StarFighter Part 2.

As a final note, I played with the paperback cover and found that the glossy version looks much better than the matte print…it really makes the awesome artwork by Warren Design stand out. And, thanks to Warren’s keen eye, I fixed the alignment issues on the cover. It looks freakin sweet (don’t mind all Kirsten’s notes sticking out the side…it’s still a work in progress)! I am totally psyched. 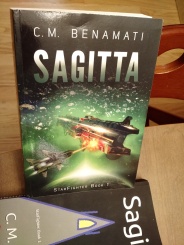